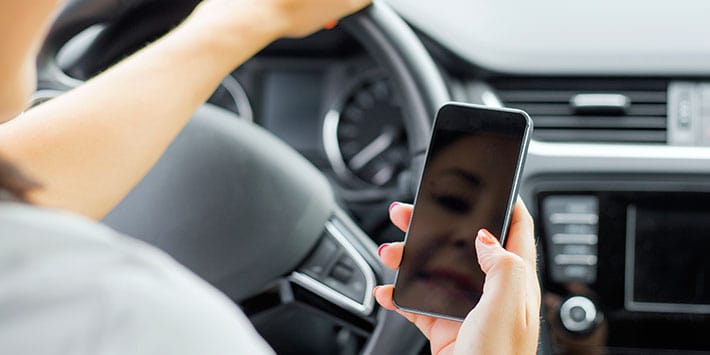 Distracted Driving: A New Safety Threat on Our Roads
April 20, 2016

We have been driving cars for 125 years. We’ve been talking on telephones for 100 years. We have only combined these two activities, to any great degree, in the last 10-15 years. Motor vehicle crashes are the No. 1 cause of accidental death in the United States. Crashes are the leading cause of all death, accidental or otherwise, for everyone between the ages of 5 and 35. Those between the ages of 15 and 20 are more likely to die in a car crash than the next three leading causes of death combined – homicide, suicide and cancer.

According to the National Highway Safety Administration (NHTSA), the critical reason for 94 percent of crashes is driver error, as opposed to vehicle or environment related reasons. Recognition and decision errors, which include driver distraction, represent 74 percent of driver error. The National Safety Council (NSC) estimates that at least 27 percent of crashes in 2013 involved drivers using cell phones, including 1.2 million crashes where drivers were talking on cell phones, and a minimum of 341,000 crashes during which drivers were texting.

All Distractions Are Not the Same

Drivers who use their cell phones while driving expose themselves to a significant safety risk that affects both the driver and those with whom they share the road. Cell phone distraction involves all three types of driver distraction: visual, manual, and cognitive. More than 30 research studies have found that hands-free devices offer no safety benefit, because they do not reduce the cognitive distraction of conversation.

Distracted driving crashes are the result of two factors; 1) the risk of the activity, and 2) the prevalence of that risk. Most people, including lawmakers and researchers, only focus on risk and seem to ignore risk exposure. In evaluating what causes crashes, both are equally important. We typically have little concern for a risk to which we are seldom exposed, however we should have great concern for a risk to which we are continuously exposed as in the case of cell phone distracted driving. It is risk exposure that makes cell phone use while driving such a unique and dangerous activity. NHTSA has stated (based on its annual NOPUS study) that more than 10 percent of all drivers are using their cell phones at any given time. No other distracting behavior or risk comes close to that level of exposure. It is risk exposure that makes cell phones the most dangerous distraction that drivers face on a continuing basis.

The Human Brain Does Not Truly Multi-Task

The field of Cognitive Neuroscience has studied human attention for more than 80 years. These scientists will tell you there is no such thing as true “multi-tasking.” When we are reading a book or magazine article and the phones rings, we naturally stop reading, answer the phone and have a conversation. Most of us would never consider continuing to read as we talk on the phone. That is because the human brain does not multi-task, it toggle tasks. It switches back and forth between two tasks, never engaged in both at precisely the same time. We know that if we try to read and talk on the phone, we are not doing either task well, so we rarely, if ever, try to do both at the same time. Yet, most of us think it is perfectly fine to talk on the phone and drive a vehicle. If we make a mistake reading a book, we can re-read a paragraph. If we make a mistake driving a vehicle, it can negatively impact our lives or the lives of others.

Judges Can Make an Impact

The rapid advancement of mobile communications technology has enabled drivers to engage in all kinds of activities while driving a vehicle that have nothing to do with the task of driving. As long as crashes are killing and seriously injuring so many people, and as long as driver error is the overwhelming leading cause of crashes, does it make sense to allow, and even encourage, the driver to engage in phone calls, Facebook updates, voice based texting, and other activities that have nothing to do with the already dangerous task of driving?

The auto and consumer electronics industries have claimed that “eyes on the road, and hands on the wheel” are the only critical requirements for distraction free driving. They seem to believe the mind is not required to safely operate a vehicle. This flies in the face of years of science and most importantly common sense. It is time that we focus first and exclusively on the task of driving, for our safety, and for the safety of everyone with whom we share the road.

Judges can and should assume a leadership role on this issue. They can do this by having a complete understanding of the science and the risk, setting a strong and consistent personal example, and educating the public, both in and out of the courtroom, about the significant risks and public safety threat of cell phone distraction while driving.

David Teater is founder of FocusDriven LLC, a firm dedicated to educating businesses and the general public about the dangers of distracted driving. He a frequent speaker on the topic and has appeared before several state legislatures and testified before the US Congress. In 2009 he joined the National Safety Council after its call for a nationwide ban on cell phone driving, where he led the Council’s distracted driving initiative for over six years. Mr. Teater is an instructor for the NJC’s Traffic Issues in the 21st Century course, offered May 16-19, 2016 in Reno.