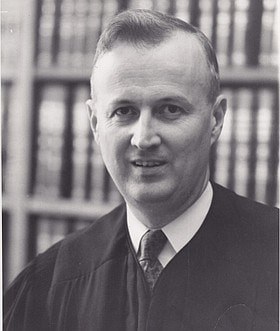 The National Judicial College is saddened by the recent passing of Judge Timothy Charles Murphy, former Senior Judge at the DC Superior Court. He served 20 years as faculty, six years on Faculty Council, and six years as a Board member at the NJC.

Born in Glens Falls, New York, Judge Murphy graduated from St. Michael’s College in Vermont, Georgetown Law School, and The George Washington University. He began his Civil Service at the National Labor Relations Board and in 1960 became an Assistant US Attorney for the DC Court of General Session.

In 1966 he was appointed by Lyndon Johnson as a Federal Judge for the Court, where he served for nearly 40 years. Tim taught at many university law schools including Georgetown, American, and Catholic, as well as Potomac Law and The National Judicial College. In 1985 he took Senior Judge status and joined the Executive Office of the U.S. Attorney, where he served over the years as Special Assistant to the Attorney General, Deputy Associate Attorney General, and Associate Deputy Attorney General. He returned to the D.C. Superior Court where he served as a Senior Judge until he retired. He also served in the U.S. Marine Corps, where he rose to the rank of Colonel.

Judge Murphy passed away at age 85 after a long illness. He is survived by his wife of 51 years, Barbara; daughter Kathleen Sweeney; sons Brian, Timothy, and Christopher; 12 grandchildren; two great grandchildren; sisters Pauline Sullivan and Anne Yankoupe; and 16 nieces & nephews.