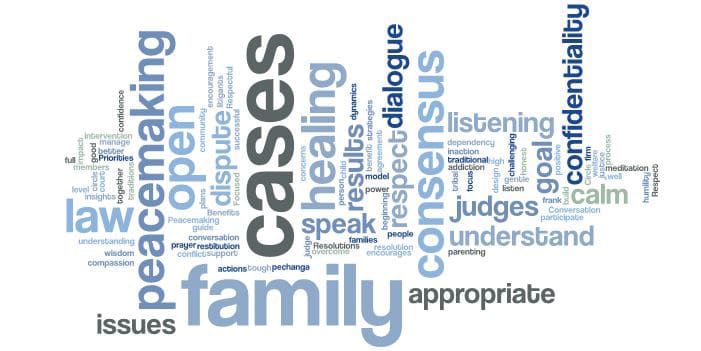 Justice in a circle: how a peacemaking court works
November 20, 2016

If you were to close your eyes and envision a courtroom, chances are you’d conjure the stereotypical image of a bench, a judge in a robe, the juror’s box.

For example, in the court created two years ago by the Pechanga Band of Luiseño Mission Indians located in Southern California, participants sit in a circle, and a peacemaking judge helps guide an open conversation. One of the Luiseño traditions is basket making, so the court uses a basket as a totem. Participants may speak only when in possession of the basket.

The Pechanga court exercises general jurisdiction and cases typically involve child welfare and family issues. Conversation ensues among the two peacemaker judges, the parties directly involved in the dispute, as well as family and community members. The end goal is to reach a consensus, often involving restitution.

“We’re not a formal court in terms of formal processes,” said Joaquin Fletcher, senior peacemaker judge of the Pechanga Indian Reservation. “We can do all the things any other court would do when dealing with family law, but our approach is different.

The Pechanga’s peacemaking judges recently attended a course, Advanced Tribal Bench Skills, at The National Judicial College for their courts’ first major training exercise. Their goal for the course was to see and understand how other tribal courts work.

Although the court has presided over only a dozen cases so far, the Pechanga’s peacemaking approach has produced positive results, according to Fletcher. Resolutions have been reached to keep families together and provide support to overcome addiction, among other successes, he said.

“This seems to work for us,” he said.

The Pechanga court’s results match those from studies on peacemaking courts. Data show a better than 90 percent settlement rate across multiple courts, including the Organized Village of Kake and the Washtenaw County (Michigan) Trial Court , which became the first state court to use peacemaking.

Successful elements of peacemaking courts provide insights not only into dispute resolution and justice in Indian Country but for American courts as well. U.S. Supreme Court Justice Sandra Day O’Connor wrote in 1997, “the Indian tribal courts’ development of further methods of dispute resolution … provide a model from which the Federal and State courts can benefit.”

The peacemaking session in our court starts with the parties, judges, advisers, social services, or others sitting at a round table. The judges do not wear robes; business or traditional attire is appropriate. The round table and lack of formal attire help provide a level playing field for all.

Start Off Calm and Focused

At the beginning of the session, everyone is introduced and shakes hands. An opening prayer or meditation is done, focusing on the healing and well-being of the parties (a deep-breathing exercise may be done as well). These actions help calm the parties and enable them to be focused on the hearing, as well as reducing the tension that may exist among the parties.

Through good listening and respect, participants can better understand each party’s concerns, and an agreement is more likely to be reached. It is the goal of the court to ensure that all actively participate in the session and try to build a consensus and understanding through open dialogue.

Be Firm Yet Respectful

Be tough on the issues but gentle on the person. This allows the parties to fully understand the impact of actions or inaction without disrespecting any party or participant. It also allows for understanding by all and initiates the healing process for the parties. Social services, counselors, and others provide support to the parties.

Confidentiality in our peacemaking court encourages all to be frank and open and to speak without withholding items or actions. A full and honest dialogue can be necessary to reach a consensus.

Since the beginning of The National Judicial College more than 50 years ago, tribal judges have attended the NJC’s courses. In 1992, the College began offering courses specifically for the tribal judiciary. The NJC wanted to establish a separate center that focused solely on tribal justice, and so, in 2002 the NJC founded The National Tribal Judicial Center. The Center is one of the first organizations to address the distinctive needs of American Indian and Alaska Native tribal law practitioners and remains one of the few to do so. Judges, peacemakers, court personnel and multi-disciplinary teams from many nations across Indian Country come to the NTJC to learn with and from each other.