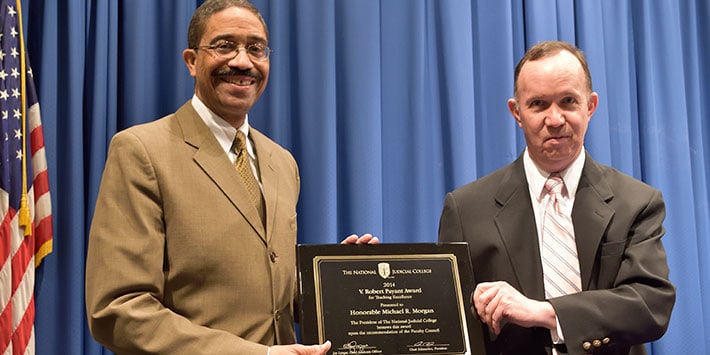 National Judicial College President Chad Schmucker was on-hand at the North Carolina Bar Association annual meeting in Ashville, N.C. on June 19, 2015 to present the prestigious V. Robert Payant Award for Teaching Excellence to the Hon. Michael R. Morgan, a superior court judge in the General Court of Justice for the State of North Carolina.

“I am grateful to the North Carolina Bar for their willingness to put me on the schedule in order to make this presentation to Judge Morgan,” President Schmucker said. “I also appreciate the Bar Foundation’s past support of our scholarship program for judges.”

Early in his career, Judge Morgan attended the NJC course Administrative Law: Fair Hearing in 1990, a course that is still very popular today.

He became a member of the NJC faculty in 1993, teaching the same course he took years before. He has continued to teach at the College every year since.

From 2006 to 2008, Judge Morgan served as a member of the NJC Faculty Council, a governing body that ensures that quality teaching standards are maintained and that the curricula offered are relevant, challenging and invigorating to the College’s participants.

Judge Morgan is a superior court judge in the General Court of Justice for the State of North Carolina — elected from the state’s Tenth Judicial District, which includes the state capital of Raleigh. Prior to his election to the superior court bench in November 2004, Judge Morgan served as an elected district court judge in North Carolina’s Tenth Judicial District for 10 years and as a state administrative law judge with the North Carolina Office of Administrative Hearings for five years.

About the V. Robert Payant Award for Teaching Excellence

The award has been given annually since 1988 and is presented at the conclusion of the academic year. Morgan is the 26th recipient. Judge Payant became NJC’s seventh dean and chief executive officer on July 1, 1990, and in 1994 he was named NJC’s president, a position he held until September 1998. Prior to that position, he served 20 years as a Michigan trial judge: as a circuit court judge from 1978 to 1982, as a district court judge from 1969 to 1977, and as a probate and juvenile court judge from 1963 to 1968. Earlier, he was in private practice and served as the city attorney of Iron Mountain, Michigan.