Photo: Senior Judge Larry Sage (right) in Afghanistan, where he served as a Rule of Law Advisor from 2007-2010. Next to the UC Berkeley alum (notice the “Cal” patch) is his “shooter team” leader (identity confidential). Advisors traveled in armored vehicles (rear) with three armed shooters, two of whom were always Gurkhas (retired British Nepalese Army).

I’ve had a military ID my whole life.

I started with a dependent’s ID as the son of an Air Force chief master sergeant and then got drafted for Vietnam during my first year of law school. I served 26 years, active and reserve duty, as an Army infantryman. I now carry the ID of a retired “grunt.”

There are many “alpha” military types in the law, particularly veterans of the combat military branches. I had the privilege to work with some. Perhaps the most famous was Mills Lane, the legendary boxing referee, Nevada District Court judge, and star of the syndicated reality TV show Judge Mills Lane. Mills later became an MTV star as well, providing the voice of the referee in MTV’s animated comedy series Celebrity Deathmatch.

Mills’ catchphrase for starting boxing matches —“Let’s get it on!”— became the title of his autobiography (subtitled “Tough Talk from Boxing’s Top Ref and Nevada’s Most Outspoken Judge”). He was a former Marine (and boxer and deputy sheriff and district attorney). He suffered a debilitating stroke in 2002.

All of us grunts have had to make adjustments to succeed as judges. I think my having been a combat arms soldier made my traits a bit rougher.

In the military, our language is often rough, our humor dark, our candor brutally frank (at best). As a judge I adopted the English “bloody” as a more socially acceptable substitute for barracks profanity.

During one of my first days on the bench, a defendant called me an a–hole in open court. I didn’t say anything. Later, during a recess, the bailiff turned my mike off and asked why I hadn’t gotten angry. It was because that word is considered a term of endearment in the military.

Sometimes the people who appeared before me found out about my military background and tried (at their peril) to use it to their advantage. I had a defendant before me once who had pleaded guilty or no contest. He asked me to show mercy for a fellow veteran.

I said, “What does it say on your DD 214?” That’s a form every veteran receives certifying discharge from active duty.

I held him in contempt until he apologized for taking false honor and lying to the court. This happened maybe three times.

The greatest challenge for me in transitioning from a combat branch to the bench was maintaining judicial neutrality. This came easier for Mills because of his experience refereeing some of the most famous boxing matches of our time.

I found that keeping the record was relatively easy in felony cases because of the presence of more experienced lawyers. But with misdemeanors, many public offices and private firms send their newer, less-experienced attorneys (baby lawyers). An entire case may hinge upon an obvious, but omitted or incorrect, objection, an omitted element of jurisdiction, an erroneous handling of evidence, even a single evidentiary item or question.

Some newer lawyers forget to establish an essential element of their cause of action or criminal charge, a jurisdictional location or an amount. Some simply ask a witness for their evidence in an objectionable manner, and then, for whatever reason, can’t recall or utilize the proper manner to enter that evidence or testimony.

When this happens, the veteran in me wants to take charge, fix the problem, put things right. But the Model Code of Judicial Ethics says that’s not your job.

I was lucky to find a role after leaving the bench that allowed me to combine my civilian calling with my infantry experience. From 2007–2010 I served in Afghanistan as a contracted Rule of Law Advisor to the Afghan government and the NATO-led International Security Assistance Force.

While I was there I got to know a lot of lawyers from the Judge Advocate General’s Corps. Remember, I never served as a lawyer or judge in the military. I was strictly an infantryman.

The JAGs said, “You sure swear a lot for a JAG.”

I guess you can take a grunt out of the military, but when you put him back in a combat zone, some of that roughness inevitably reappears. 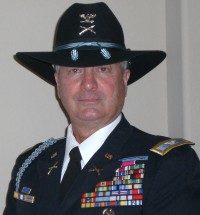 Larry Sage is a senior judge, an NJC alumnus and, since 1998, a faculty member. From 1995–2006 he served as an elected municipal court judge in Sparks, Nevada. A retired infantry colonel, he was inducted into the U.S. Army Officer Candidate School Hall of Fame and awarded the Legion of Merit. He offers judicial and rule-of-law advising services through his consultancy, Legionnaire Sage Advice. In addition to his law degree, he holds a Master of Judicial Studies from the NJC and the University of Nevada, Reno.