“Your Honor, I’ve made that motion before eight different judges, and you’re the first one to deny it.”

As weak as this lawyer’s argument was from a legal standpoint, the implication was clear: You, judge, are new here and obviously don’t understand how things are done.

That interaction, just a few days into my term as a new judge in early 2017, started me thinking about the significance of experience versus tradition. As of this month, some 75 percent of my county’s 53 Superior Court positions will have turned over since 2012. The baby boomer judges—born between 1946 and 1964—are quickly transitioning from the bench.

As new judges arrive and veteran judges leave, I think a lot about how to benefit from the wisdom and experience of my more seasoned colleagues, how to respond to “It’s always been done this way,” and what I can offer my fellow judges, new and veteran.

When that lawyer chided me for going against the grain on a motion he apparently always won before, it would have been easy to dismiss him. I could have responded, “It’s a new era, and I’m not beholden to decisions of the past.”

That’s not what I did.

Instead, I listened to the lawyer’s argument and consulted my colleagues. It is not uncommon for judges to rule differently on similar issues, but if seven other judges decided one way, and I decided another, I wanted to know why. I still denied the motion but not before understanding why other, more experienced judges saw the issue differently on different facts.

I was among seven new judges elected to the King County Superior Court in 2016. As we took the bench, some well-intentioned supporters of ours hoped we’d shake things up on the court. But I’m no fan of change for change’s sake. It’s not my job to shake things up.

The question is significant because of the difference between tradition and experience.  There may be traditions that leave the court with my retiring colleagues, but what will be sorely missed is their experience. Each of us new judges is competent in understanding and applying the law, but the skilled exercise of discretion takes time to develop. The question I most ask my more experienced colleagues is not, “What does this statute or case mean in general?” but “What does it mean in this situation?”

The next generation of judges will be millennials, born between 1981 and 1996. The average law school graduate is around 27 years old, and the average judge on my bench had 20 years of experience prior to appointment or election. Assuming that someone born in 1981 graduated from law school at age 27 in 2008, we can expect to start seeing millennials take the bench in about nine years, if not sooner!

I spoke recently with a group of high school students at the courthouse. I let them try on some judicial robes and handle gavels; many said they’d like to be judges. I’m nearing 50, and in Washington state, the mandatory retirement age for judges is 75. Assuming the voters will keep me till then, I would retire no later than around 2045. It occurred to me that one of those high school students trying on my robe just might become the judge who succeeds me.

I look forward to passing on some of the wisdom I’m learning now from my retiring colleagues. Hopefully by then I will have some of my own to impart.

Anyone can write a Reflection from the Bench

Send your ideas or essays to njc-communications@judges.org. You’ll get final approval over any edits. 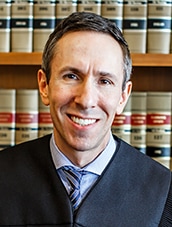 David Keenan presides over both civil and criminal jury trials. He was elected to the Washington State Superior Court for King County in 2016 after working in the White Collar, Investigations, Securities Litigation & Compliance practice group at Orrick, Herrington & Sutcliffe. He also spent nearly 15 years in law enforcement, working full time as a federal agent while attending law school at night. He was raised by his mother on public assistance, was arrested and charged as a youth, and dropped out of school after repeated suspensions, later earning his GED. He now works with programs seeking to disrupt the school-to-prison pipeline.