By By Judge Robert McBeth

In a career that spans over 30 years, Professor Clancy has evenly split his time between academics and practice. He has taught at seven law schools and holds the title of professor emeritus from the University of Mississippi School of Law, from which he retired in 2014. He practiced criminal law in Washington, D.C., and Maryland. He served as chief of the Post Conviction Unit in the State’s Attorney’s Office for Prince George County, Maryland, and as an assistant attorney general for the State of Maryland in the Criminal Appeals Division, in addition to his private practice. He continues to be a valued resource teaching at The National Judicial College.

Professor Clancy organized and developed the National Center for Justice and the Rule of Law as part of his teaching assignment at the University of Mississippi School of Law (2001). This program focused on issues relating to the criminal justice system and implemented its mission through projects, conferences and publications that examined important criminal law and procedure issues, particularly addressing issues of technology-facilitated crimes against children.

Professor Clancy began his NJC experience in 2003 when he brought the National Center for Justice and the Rule of Law to The National Judicial College as a program designed specifically for judges. His initiative included an annual symposium and the James Otis lecture series (each published annually as a special edition of the Mississippi Law Journal). The partnership with the NJC offered the only national educational program in search and seizure for trial and appellate judges and the only national educational program for state judges on computer-related searches and seizures. Over the years, through a partnership with the NJC, the center offered approximately 50 courses on search and seizure to trial and appellate judges from all 50 states.

Lastly, we would all be remiss if we did not applaud Professor Clancy’s work in the area of internet crimes against children. His Cyber Crime Initiative was simply outstanding! As a result of this initiative, the National Center for Justice and the Rule of Law received grants from the Department of Justice to educate judges on internet crimes against children, which allowed the center to create a series of conferences, webinars and written materials. This particular program promoted awareness of computer-related crimes and was the only national educational program for state attorneys general offices (including 29 conferences, cyber crime publications, webinars and projects to combat cyber crime).

“I have taught a lot of different groups—judges (including trial and appellate), law students, police academies and representatives from the attorneys general offices in many, many states. My favorite and best group is judges. They are a mature audience, they want the information I seek to impart, and they have the perspective to use it. I receive a great deal of satisfaction in working with judges.”

Professor Clancy continues to present at judicial conferences on his favorite topics of Fourth Amendment and cyber crime. He presented his acclaimed course Fourth Amendment: Comprehensive Search and Seizure Training for State Trial Judges last September in Denver and will do so again in San Diego on August 5-9, 2019.

“I’ve worked with Tom for nearly his entire tenure at NJC,” says Director of Special Projects William Brunson. “I’m so impressed with his tremendous knowledge and experience. He has a true passion for the Fourth Amendment and everything that it stands for. I enjoy his sense of humor and the way he engages the judges in his classes. They know they are interacting with someone who knows the subject inside and out. I’ve also had the great opportunity to meet his wife and two sons. He and his wife have raised two outstanding young men.” 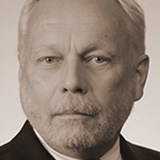 Professor Clancy currently lives with his wife, Sally, on Cape Cod. In his free time, he enjoys studying American history, writing, and doing projects around his house.