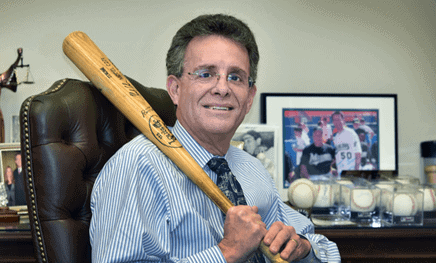 Baseball and the Law: One of the Current Issues in the Law Course Topics
May 01, 2016

“One of the joys of being a Program Attorney for the NJC’s Current Issues in the Law class (Oct. 31- Nov. 4) is becoming familiar with new topics each year,” says Melody Luetkehans, Esq. Luetkehans has arranged for Hon. Lou Schiff, a Broward County, Florida, judge and long-time NJC faculty, to present three hours on baseball and the courts as part of the course.

Schiff says his session will cover cases that have just emerged in April 2016 including: the Charlottesville Tom Sox abandoning their team trademark application following pressure from the Boston Red Sox and Chicago White Sox; ESPN’s firing of baseball analyst Curt Schilling over his posting of a meme on Facebook related to transgender bathroom laws; and the lawsuit against the Atlanta Braves brought by the family of a man who fell to his death over a guard rail at the stadium in 2015.

“Every state has a professional baseball team and the issues of fantasy baseball and gambling make the impact of baseball upon the courts even greater,” Schiff says.

Schiff and co-author Robert M. Jarvis, Nova Southeastern law professor, just published a book on the legal impact baseball has had on American courts over 250 years called Baseball and the Law: Cases and Materials.

An introductory chapter covers the role lawyers have played in the development of the sport.  Schiff and Jarvis then examine legal issues from player salaries, franchise relocations, and steroids, to fan safety, broadcast rights, and gambling. They also discuss racial and sexual discrimination; tax planning, asset protection, bankruptcy; and the rise of technology. Court decisions, arbitration awards, law review articles, newspapers stories, and blog posts are cited to place baseball in three different contexts: cultural, historical, and legal. Schiff wrote an article for The National Pastime, American Baseball Research Journal regarding baseball cases and Florida Courts which will be published in July and will be linked to the August issue of Judicial Edge.

Other topics to be covered in the October course on Current Issues in the Law include: the impact of SCOTUS’ Obergerfell v. Hodges ruling, the legalization of marijuana and fundraising in judicial elections.