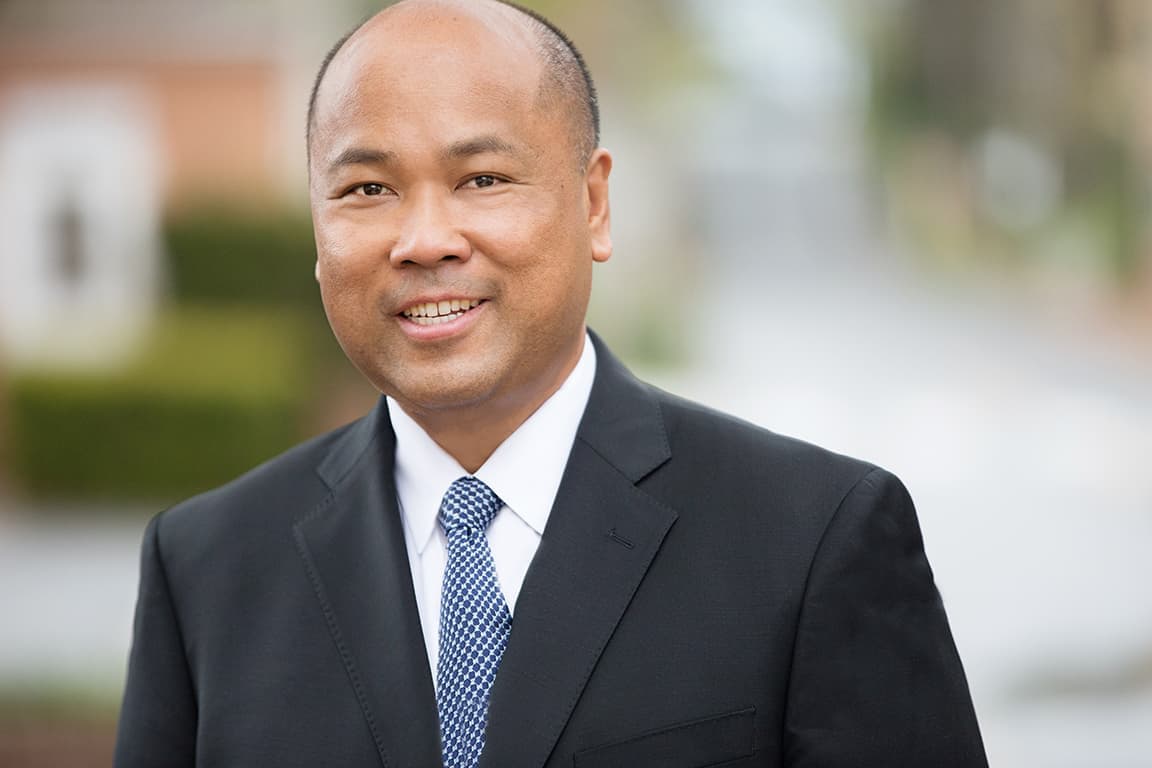 College welcomes its next president
April 20, 2017

The former chief trial judge and captain in the U.S. Coast Guard was unanimously selected by the NJC’s Board of Trustees earlier this month to become the college’s ninth chief executive. He arrived in Reno yesterday, April 19.

Aldana, 47, will officially take over as president May 1, succeeding Chad C. Schmucker, who is retiring after three-plus years leading the College. The first Asian Pacific (Filipino) American chief judge in U.S. military history, he will be the second person of color and first military judge to lead the College.

The new president, who has also held leadership roles with the American Bar Association (ABA), said he is resolved to leading the College to a renewed sense of purpose and to forging new partnerships.

“With current attacks on the rule of law and on the independence of the judiciary, I cannot think of a better calling than to devote my time and energy to ensure that the guardians of our rule of law are taught not only the knowledge and skills to effectively carry out their judicial duties, but to instill in them the courage to make difficult decisions,” he said.

Mark Tratos, chair of the Board of Trustees’ Search and Transition Committee, said: “We were keenly aware of the increased public scrutiny the American judiciary faces in these politically turbulent times. The College’s mission—to advance justice for all citizens through well-prepared, highly skilled and well-trained judges— is more critical than ever. Judge Aldana’s strong connections to both the military justice system and the larger bench and bar, through his work in the ABA, makes him a perfect fit.”

“The ABA is the founding partner of the NJC and Benes is a highly respected, proven ABA leader. He will be a tremendous catalyst in building an even stronger relationship going forward.”

Chair-Elect Kim Dean Hogrefe said: “The board was gratified to have a pool of such distinguished candidates. We were impressed by Judge Aldana’s experience and accomplishments. What also stood out was his palpable enthusiasm. It was clear how much he wanted to get started on accomplishing great things for the College.”

Aldana has served with the Coast Guard since 1994 in multiple leadership positions. As chief trial judge, headquartered in Washington, D.C., he presided over felony trials throughout the country while overseeing a trial judiciary composed of 10 judges.

Prior to being named the Coast Guard’s chief trial judge, he served as an appellate judge (2015-16) and trial judge (2005-2011). Before that, he was chief legal officer of the Eighth Coast Guard District in New Orleans, Louisiana. In that role, he oversaw the largest field legal office in the Coast Guard, providing legal support to more than 4,700 personnel at more than 80 operational units in 26 states.

Before his posting in New Orleans, he served as chief counsel of the Legal Engagements Division of the Defense Department’s U.S. Africa Command, which is based in Stuttgart, Germany. He led the U.S. military’s efforts in advancing the rule of law by working with African partner nation militaries and organizations such as the International Institute of Humanitarian Law and the Defense Institute of International Legal Studies.

In the aftermath of 9/11, he was deployed as a legal adviser to the Department of Defense Criminal Investigation Task Force in Guantanamo Bay, Cuba, conducting criminal investigations against suspected terrorists detained by U.S. forces. He also served as a trial attorney for the U.S. Department of Justice’s Environmental Enforcement Section.

Outside of his military service, Aldana has been active in leadership of the American Bar Association, which helped launch the NJC in 1963 and still supports the College financially. He is currently a member of the ABA Law and National Security Advisory Committee. He recently completed service on the board of the ABA Rule of Law Initiative and on the ABA Commission on Diversity and Inclusion 360. He is a past chair of the ABA Solo, Small Firm and General Practice Division. He also served as assembly speaker of the ABA Young Lawyers Division and was a member of the ABA House of Delegates.

He is admitted to practice in Washington state and before the Court of Appeals for the Armed Forces and the U.S. Supreme Court.

Awards and other recognition

What others say about Benes Aldana

“He is one of the most respected individuals that I know. He is a go-to guy. If there is a tough job, Benes is the person to do it. Everything he does is done with excellence, integrity and vision. He is committed to judicial education and I think he is aware of issues facing all judges. I hold him in very high regard.”

“I’ve known Benes for a number of years, and he is an extraordinary leader, both in the military and as a longtime volunteer with the ABA. He served very effectively as chair of the ABA’s Solo, Small Firm and General Practice division. He’s a man of integrity. He is an extremely hard worker and will get results. I’m pleased to learn of his selection to this very important position.”

“Throughout his career, Captain Aldana has exhibited extraordinary commitment, outstanding legal and leadership skills, and professionalism in all of his career endeavors in the law and in his community. He has a well-established reputation for balance and integrity. We look forward to continuing our great relationship with the NJC under Capt. Aldana’s leadership.”

“Captain Aldana is widely respected by people from all walks of life, and through his substantial and lasting accomplishments he has served as a role model and inspiration to the judicial and legal communities. He is a visionary who will lead The National Judicial College to its next level of growth as an exceptional learning institution for judges throughout the country and the world.”