I live in Indiana. My daughter lives in Oregon. She never calls. But one night long ago she did send me a text.

I did not see it until later, and it was an odd message. It reported, in plain terms, one of the major historical events of her young adult life: the killing of Osama bin Laden. No glee, no joy, just a simple statement about the death of the most famous terrorist of our time.

For a long time afterward I was not able to stop wondering about why it had been so important for my daughter to reach out to me with this news. I came to realize that there are emotional mystery pieces within her, within me, within everyone.

When I was a practicing lawyer and conducted direct examinations, I was sometimes confronted with similar enigmas. One time, years ago, I was engaged in a routine uncontested divorce final hearing – no problems, no issues. But when I asked my client, the wife, “Is your marriage irretrievably broken?” she stopped, looked down, and struggled to answer through bitter, grieving tears. I never saw this coming. I had to help her from the courtroom.

Some years later, as a prosecutor, I was questioning a young witness during the grand jury investigation of rape allegations against former heavyweight boxing champion Mike Tyson. When I asked the witness about her observations of the victim the day after the alleged rape, she stopped and ran out of the room, sobbing. Again, I did not see that coming. I spent the next hour consoling this young person whose unrealized feelings could not be suppressed.

We lawyers and judges are privileged—whether we like it or not—to witness (and sometimes trigger) powerful and unpredictable human emotions. “Law is about people,” someone once said. And people are everywhere in the law: landowners, spouses, injured plaintiffs, witnesses, court staff.

One of my most moving experiences as a judge occurred one afternoon in an almost empty courtroom. The only people present were me, a lawyer, a court reporter, and a woman who had lost her son in a car accident. It was an uncontested-damages hearing for a default judgment. The grieving mother had to describe her pain and suffering briefly for the record to justify an uncollectible judgment.

I found myself thinking, who was I to make her justify her grief? As I watched, I felt so utterly unworthy to share such a dignified moment with such a noble person. I did not see my own emotional reaction coming. After the brief hearing, I hugged her and thanked her for doing something so difficult

In my 20 years as a judge, multiple lawyers–men and women–have shared personal and professional problems in my office with tears and worry. Nothing is so weighty as the conflict and concern that arise when a lawyer faces a tough case. When the burden gets to them, they often don’t see it coming.

When I find myself surprised because I didn’t see something coming, that is an epiphany. Why am I so struck when my daughter decides to communicate out of the blue, no matter what the reason or circumstance? I am affected because it shows me what I should already know: Our trained logic and reason will get us only so far. As the Christian philosopher Blaise Pascal famously observed, “The heart has reasons that Reason does not know.”

We work in a human world full of mortal souls, beauty, demons, and uncertainty. I should realize that in my work as a judge I share a time, a solution, a promise to work forward that is unique to a legal case. But these circumstances are also unique to each person involved.

When we are faced with that occasional uncivil moment–with a judge, opposing counsel, even a colleague at the firm–we would do well to allow them to be human. It is not trite to think that the gestures of common courtesy–a handshake, a pat on the back, a soft word of conciliation–are just as important as any legal argument. Such moments of humanity make our profession a rewarding one. We should resolve to savor them. They often arrive unexpectedly, like a late-night text from a daughter far away.

Personal essays by your fellow judges (active or retired) talking about their experiences in the judiciary. Have an idea for an essay? Email it to njc-communications@judges.org. 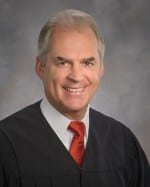 Judge David J. Dreyer has served on the Marion Superior Court (Indianapolis) since 1997. He is an alumnus of The National Judicial College, has obtained a Master of Judicial Studies, and is completing a Doctor in Judicial Studies from the Judicial Studies Program with the University of Nevada, Reno.