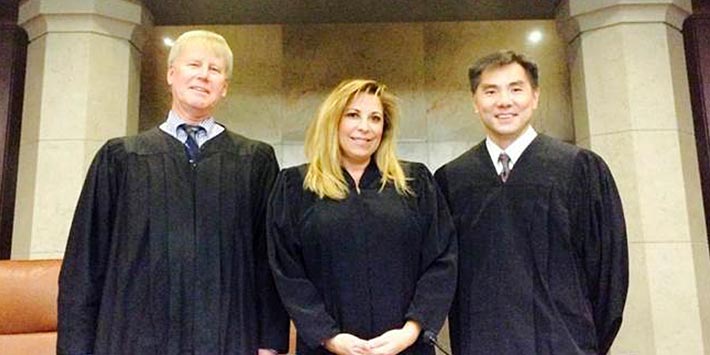 The Nevada Court of Appeals will hold Oral Arguments at The National Judicial College on the University of Nevada, Reno campus on Oct. 21, 2015 from 10 a.m. to noon in the Model Courtroom.

All three members of the Court of Appeals, Chief Judge Michael Gibbons, and Judges Jerome Tao and Abbi Silver, are former participants at the NJC. Just months after being sworn-in on the Court, the judges completed two different NJC courses that helped sharpen their overall judicial skills and enhance judicial writing techniques.

Nevada voters elected to create the Court of Appeals during the November 2014 election by adding a provision to Article 6 of the Nevada Constitution.

Prior to this change, the Supreme Court heard all appeals, including everything from murder convictions to appeals of drivers’ license revocations and was the busiest state supreme court in the nation, according to a report from the National Center for State Courts. The Court of Appeals will hear roughly one-third of the appeals filed, thereby allowing the Supreme Court to give greater attention to the more serious cases.

Cases set to be heard on Oct. 21 include:

The public is invited to attend. For groups of 10 or more, please contact Megan Downs at The National Judicial College so that we may accommodate your group.

Media must receive permission through the court to record or photograph oral arguments. Visit the court’s website for more information.

The NJC is housed on the historic 255-acre campus of the University of Nevada, Reno. For over 50 years, the NJC has been offering courses to improve judicial productivity, challenge current perceptions of justice and inspire judges to achieve judicial excellence. The NJC is a Nevada not-for-profit 501(c)(3) educational entity affiliated with the American Bar Association, governed by an 18-member Board of Trustees.