I reread cases I hadn’t looked at since law school. I reviewed law review articles and blog posts. I honed my PowerPoint and teaching notes to perfection.

All of that was important, but when I traveled to China to teach American Legal Procedure at Ocean University in Qingdao in 2018, I discovered that my best preparation was the 34 years I’d spent on the bench, especially the times when I handled cases involving self-represented and/or non-native English-speaking litigants.

Conducting a trial often requires us judges to be teachers. Every time we explain a process or procedure, rule on an objection, or write an opinion, we have an opportunity to make our complex system easier to understand and navigate.

I learned long ago to stop using legal jargon and Latin phrases, choose the simplest explanation for any action taken, and never use idioms or metaphors to embellish a ruling. These measures, I learned, reduced stress among litigants. And when there was less stress in the courtroom, everyone performed better, including me.

For that reason, I began my teaching by seeking to reduce the stress levels of my 63 Chinese undergraduates.

I let them know that I would not call on them to answer questions but would ask for volunteers instead. A collective sigh of relief reverberated.

I announced that, as I had with the people in the courtroom, I would address them by their surname with the appropriate prefix or title.

I created a seating chart and gave them the option of writing their given names or the English names they had all been assigned as high school students to make it easier for people like me to identify them. The process of Anglicizing names carefully and purposefully given at birth, solely to make it easier for westerners to pronounce, struck me as disrespectful.

Ninety percent of the class opted for their Chinese names. My pronunciation wasn’t perfect, but I think that the students appreciated my effort.

As the eight weeks of three two-hour class sessions per week passed, I learned as much as I taught, much of it about myself.

Like most judges, I was always too busy managing a crowded calendar of challenging cases and litigants to spend time musing about the vagaries of the justice system and my role in it. Being a professor of practice changed that.

I described how the concept of due process became a reality in the United States.

We explored the Constitution, the Bill of Rights, and the roles of state and federal courts.

We pondered the meaning of “fair hearing” and how both processes (such as notice and disclosure) and people (lawyers, judges, jurors) affect whether a hearing is fair or not.

One time a student pointed out that the midterm included a question about a topic we hadn’t yet covered. Many students had answered the question incorrectly, and I agreed to eliminate it from the final scoring.

When I explained my decision, I couched it in due-process terms: I could not penalize them for missing an answer when I had not given them notice. I complimented the student who spoke up, noting that he did a great job for his clients, the class!

During the first class, I asked how many students planned to practice law and was surprised when very few raised their hands. One or two wanted to be judges. A few others said they hoped to work in business. Most of the class was silent.

Halfway through the semester, we considered the topics of discovery and disclosure. That got the class energized and intrigued by the prospect of actually representing a client and litigating a case. With a lot of prodding (sometimes by staring directly at a student who was nodding enthusiastically), I got a few students to share their trial strategy.

“Why,” I asked, “would the plaintiff’s attorney want to join the insurance company in the complaint as a defendant?”

“Because they have the money,” said a very savvy student in the back of the room.

In many legal systems around the world, including in China, legal education involves a professor who lectures about what the rules are. The students dutifully take notes and regurgitate the rules on the final exam.

American legal education is completely different because our legal system is based on an understanding that most legal rules contain gaps and ambiguities that require interpretation, which is a major function of judges.

I needed a way to gauge the students’ ability to research a legal issue, employ legal reasoning, and then argue a position effectively. Because I didn’t call on them, a perfect solution came from staging a moot court exercise in which every student participated with a teammate.

Students had time to prepare and they knew in advance the order in which they would be called. This helped alleviate angst about performing publicly; no one felt singled out. Every single student nailed his or her presentation. They researched the law and wrote concise, thoughtful analyses, which they then read aloud.

A couple of the more outgoing students embellished the facts and crafted arguments that were both wise and witty. They made eye contact with the judge and the audience. At the conclusion, their classmates rewarded them with sustained applause. I suggested they seek a litigation practice.

Near the end of the semester, I assigned a problem that allowed students to decide strategically whether they would file a Rule 12(b)(6) Motion to Dismiss or a Rule 56 Motion for Summary Judgment — or both. One side of the room answered as plaintiff’s counsel and the other as defense. They worked in small groups, as they would in a large law firm, and designated one student as lead attorney and reporter.

The discussions were rich and spirited. When called upon, the lead attorneys stated their positions confidently. I felt the same joy as I did in the courtroom when a self-represented litigant made the correct evidentiary objection!

My students were bright, talented and ambitious. They had already studied English, Chinese law, and other required courses in their freshmen and sophomore years. In Procedure (and other American law classes in their junior and senior years), they were studying a completely different legal framework, one that in so many ways is antithetical to their beliefs.

One of the sharpest students in class pointed that out to me when she challenged her grade on the midterm. She got an A but was upset that her answer to a multiple-choice question about the balancing of private vs. government interests was wrong.

I respectfully reminded her that this was a class in American legal procedure and that, though she might think us silly, her answer was still wrong.

I wanted to end the class with a meaningful message about the role of lawyers in society but struggled to find the right words. Serendipitously, an op-ed appeared in The New York Times just before my last class about the thousands of lawyers around the United States who volunteered to help re-unite parents with children separated at the border. It was a powerful description of how lawyers must rally to support the vulnerable and oppressed and ensure that the rule of law is enforced.

I read parts of it to the students and called on them to engage with the law similarly, whether it was to ensure the best outcome for their client in a business negotiation or the most appropriate sentence after a conviction. Commitment to legal integrity should be their goal.

They listened intently and applauded. It was clear that many more of them were now determined to be lawyers.

At a reception for the students after that last class. I was profoundly moved when many of them came up to hug me, even though public displays of affection are rare in China. They also wanted to thank me for being their teacher, for always making sure that they understood a difficult issue before moving on to the next topic, and for sharing my passion for the law and being a judge.

If some of them are lucky enough to end up on the bench, hopefully they will remember that they are not only the arbiters of legal and factual disputes; they are also teachers. 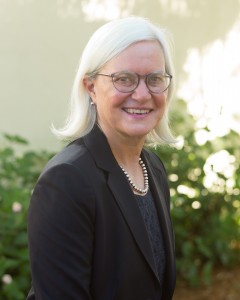 Karen Adam retired from the bench in November 2015 after 34 years as a Tucson City Court magistrate, Superior Court commissioner, and Superior Court judge. She writes and lectures on juvenile and family law topics and has been a member of the faculty of The National Judicial College since 2007. She and her husband, Professor Robert Glennon, taught in the joint University of Arizona Rogers College of Law/Ocean University of China Law School program from May–July 2018.