A biopic on Ruth Bader Ginsburg starring Felicity Jones (Rogue One, The Theory of Everything) and titled “On the Basis of Sex” is set to begin filming this fall and hit the screens in the near future. Judging from this month’s survey results, quite a few judges will eagerly await the film’s release.

The “Notorious R.B.G.,” as she’s fondly called by some (a reference to the rapper The Notorious B.I.G.), was the runaway winner in our Question of the Month for August, which asked, “Who is your favorite Supreme Court justice?” 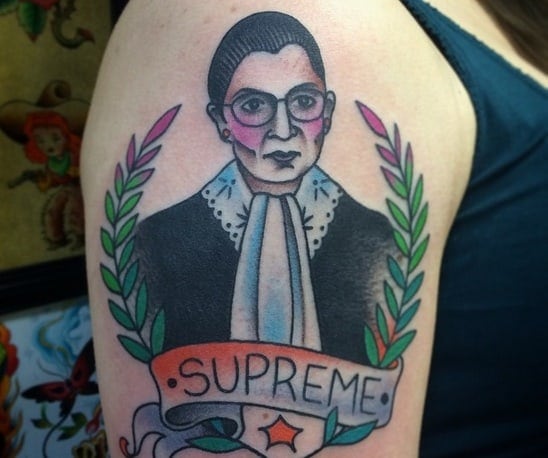 “How could she not be everyone’s favorite? RBG kicks ass!” commented one judge anonymously, as was the case with most of the judges who posted comments.

“She possesses all the qualities I believe a good judge should have: a keen intellect, a strong sense of fairness and compassion, and a commitment to seeing justice prevail,” wrote one judge who voted for Ginsburg.

Others cited her advocacy for equality and women’s rights (the focus of the upcoming movie). One judge called her a role model for girls and women. Another judge who self-identified as African American said Ginsburg, who is Jewish, understands the struggle of minorities.

Ginsburg is known for her candor and bluntness, both in speaking to the public and in her judicial opinions. “I hope I have half the chops she has at her age,” wrote one judge.

Her friendship with the late Justice Antonin Scalia was mentioned by several as an example of two people who are able see eye to eye despite ideological differences.

Sonia Sotomayor (77 votes)
“Justice Sotomayor is thorough in her opinions which are consistently informed, intelligent, and focused. I think she is competent without being brash, and above all, [she is] fair.”

Neil Gorsuch (61)
“I didn’t know who Gorsuch was this time last year. [Since then] I’ve read his writings, watched a speech he delivered, and have read his Supreme Court decisions, and he is definitely now my favorite. Besides the fact that I generally agree with his legal reasoning and decisions, his style of writing and how he carries himself are perfect. I strive to be more like him now.”

Clarence Thomas (61)
“I love Justice Thomas’ life story, his courtesy to attorneys arguing cases before the court by not constantly interrupting them with questions, and his conservative approach to cases.”

John Roberts (49)
“I think [he] has done a good job trying to maintain a balance in the Court during these highly politicized times. I may not always agree with him, but he has attempted to conduct himself and the operation of the Court in a non-partisan manner.”

Anthony Kennedy (43)
“[I chose Kennedy because] he is the most likely to leave politics out of his decision-making. He is often the swing vote for the court on the most controversial issues because he doesn’t always back one view or the other as many other justices do on both sides. Justice Kennedy appears to me to be the most open-minded of the nine justices.”

Samuel Alito (23)
“Justice Alito is the all-around great justice. He’s perhaps too conservative for some, but he is a great jurist.”

Elena Kagan (9)
“I know very little of Kagan’s philosophy. I am, however, in awe of her accomplishments at such a relatively young age.”