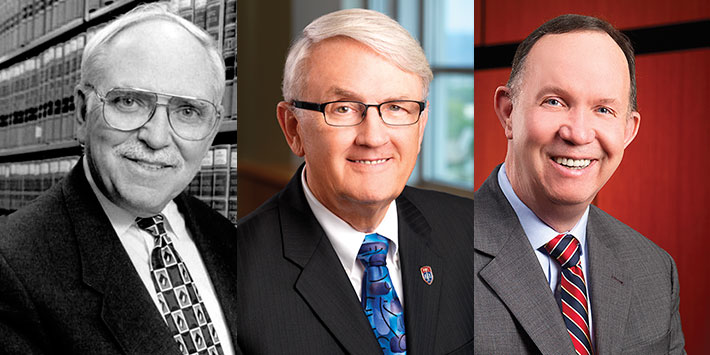 The National Judicial College in Reno is launching a Planned Giving campaign this summer using three former judges who have served as NJC presidents as examples of those who are investing in the college for the future. Former presidents V. Robert Payant and William Dressel join current president Chad Schmucker in designating a portion of their estates to the NJC.

Judge V. Robert Payant was a district, circuit, and probate judge and then was state court administrator in Michigan before beginning his service as NJC president from 1990-1998. Judge Bill Dressel was a district judge in Colorado from 1978 until becoming the NJC president in 2000. He retired in December 2013. Judge Schmucker was in the circuit court for 20 years before becoming the Michigan state administrator. He has been president at the NJC since January 2014.

The campaign is called The Empty Bench and is targeted at the several thousand judges who have received professional education at the NJC over the years.

President Schmucker envisioned the campaign based on his own career reflections. “As a judge I wondered how my judicial legacy could continue in perpetuity. I knew that, just like me, judges would connect to the image of the empty bench,” he said.

The brochure for the Planned Giving campaign shows a photo of a bench and gavel and empty chair.

The text reads, “Long after you and the litigants have left your courtroom, the profound way that you contributed to the rule of law and the administration of justice can be remembered by making a planned gift to The National Judicial College.”

Said Schmucker, “For many of our judges, the NJC is the first place they come when they begin their career. The NJC provides continuing education when they need it most, and for some judges, it allows them to return as an esteemed faculty member and prepare the next generation of adjudicators.”

The NJC provides several Planned Gift options, said Schmucker. “If there are judicial causes you care about, we can help you to have a positive impact by making a Planned Gift to support NJC course development in a specific area of the law. Choose from Administrative Law, Appellate, General Jurisdiction, Military, Special Court or Tribal.”

If a judge prefers to provide scholarship assistance, a minimum gift of $25,000 can set up a named scholarship endowment. An endowed gift of $50,000 will generate proceeds to bring a new judge to the two-week General Jurisdiction course.

You don’t need great wealth to support the NJC. By taking care of your family first in your will or bequest, then leaving a remainder of your estate to the NJC, you can create a meaningful legacy that matches your interests and circumstances,” said Schmucker.Click here to learn more about including the NJC in your estate planning. To get started on the process, please contact the NJC’s Director of Development Jeanne Hill at hill@judges.org or by phone at (775) 327-8257.

The NJC is a 501(c)(3) non-profit educational organization. Tax ID #942427596. Gifts are tax-deductible as provided by law. Disclaimer: This information is general in nature and not intended to be professional legal or financial advice. The NJC encourages all donors to seek independent legal and/or financial advice.